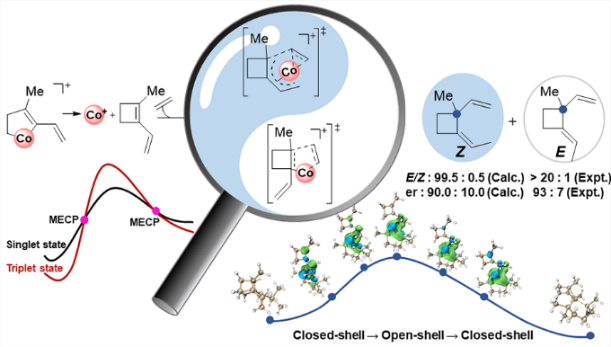 The cyclobutane unit is important to prepare complex natural products with biological activity due to the high ring strain. Among various approaches, [2 + 2] cycloaddition is one of the major strategies to prepare cyclobutane under light conditions. Recently, Rajanbabu's group reported tandem catalysis for asymmetric coupling of inactivated ethylene and enynes to functionalized cyclobutenes or cyclobutanes. However, the reaction mechanisms remain unproven.

Density functional theory calculations (DFT) have been performed on Rh(III)-catalyzed phosphoryl-directed oxidative C–H activation/cyclization to investigate the detailed mechanism, including four basic steps: C–H activation, alkyne insertion, reductive elimination, and catalyst recycling, each of which consists of different steps. Interestingly, the Rh(III)–AgOAc catalyst system was found to be more favorable in the C–H activation step in comparison with the Rh(III)–Ag2CO3 system, whereas the Rh(I)–Ag2CO3 catalyst system was more efficient for catalyst recycling.

Cl prevents insertion: The first metallanaphthalyne 2 has been obtained by Zn reduction of Os carbyne complex 1. The key to its isolation was the use of o-chlorophenyl instead of phenyl substituents to avoid formation of a putative hydrido metallanaphthalyne intermediate (supported by DFT calculations), which undergoes migratory insertion of the carbyne into the OsH bond and rearrangement to give an indenyl complex as the final product.